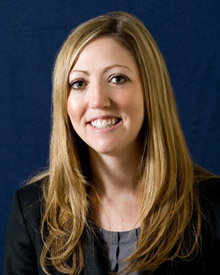 Kathryn Saldana is an associate with the Metzger Law Group, who joined the firm in 2007. Mrs. Saldana works on a variety of matters including toxic tort litigation, Proposition 65 enforcement actions, and human rights abuse cases.  She successfully argued an appeal before the Ninth Circuit Court of Appeals in Tanohv. Dow Chemical Co., 561 F.3d 945 (9th Cir. 2009), in which the Court accepted the firm’s narrow interpretation of what constitutes a “mass action” eligible for removal under the Class Action Fairness Act.

Mrs. Saldana received her undergraduate degree from the University of Oregon in 2004, where she majored in Political Science.  In 2007, she received a J.D. from Southwestern Law School, graduating cum laude.  Mrs. Saldana completed law school in two years, receiving several awards and honors.  She was a member of Law Review and the Moot Court Honors Program.  She was awarded First Place Oralist and Writer in the SCALE Moot Court Intramural Competition.  She also was awarded First Place and given the honors of Best Oralist in the Final Round at the Stetson International Environmental Moot Court Competition.  Mrs. Saldana was the recipient of the CALI “Excellence for the Future” Awards in Legal Research and Writing, Legal Reasoning, Evidence II, Appellate Advocacy, and Trial Advocacy.  She also received the Dean’s Merit Award and was listed on the Dean’s list throughout law school.  Additionally, Mrs. Saldana had the privilege of completing an externship with the Honorable Florence Marie Cooper in the United States District Court.