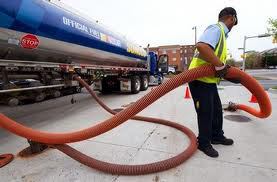 Benzene is one of the few industrial chemicals that is a known human carcinogen. Exposure to benzene can cause blood diseases such as aplastic anemia, cytopenias, and myelodysplastic syndrome, and cancers such as leukemias, lymphomas and multiple myeloma.

Because of its presence in most petroleum products, its volatility and dermal permeability, benzene presents a substantial health risk to fuel workers such as transport workers, fuel station attendants, and mechanics. Exposure monitoring shows that such workers are often exposed to levels of benzene that are known to cause blood diseases and cancers.

Epidemiologic studies show that fuel workers, mechanics and service station attendants have increased risk of hematologic diseases and cancers such as leukemia and lymphoma, as well as kidney cancer.  Interesting new research indicates that such workers are not only exposed to benzene at dangerous levels, but that workers in these industries routinely suffer decreased blood cell counts and chromosome damage as they do their jobs.  Recent studies also indicate, contrary to commonly held views, that intermittent exposure to benzene is more dangerous than continuous exposure because the human body produces higher levels of toxic metabolites of benzene when it is intermittently exposed to benzene.

Most fuel workers do not get leukemia or related diseases because their bodies are able to repair the chromosome damage that they suffer daily from benzene exposure and their blood cells regenerate when they are off work.  However, occasionally a damaged chromosome doesn’t repair itself properly and becomes a malignant clone or blood cells do not regenerate in sufficient numbers. The result can be a hematologic malignancy such as leukemia, lymphoma or multiple myeloma, or a hematologic disease such as aplastic anemia or myelodysplastic syndrome.  Workers who are genetically susceptible are most likely to develop these diseases.

What can a fuel worker do to protect himself from such lethal hazards?  The risk cannot be eliminated entirely, but it can be minimized by (1) wearing an organic vapor cartridge respirator and maintaining it properly, (2) wearing special impermeable gloves (such as polyvinyl alcohol) when handling any petroleum products, and (3) having annual blood tests to detect any abnormal blood counts.  It is now also possible to test workers to determine whether they have certain genetic polymorphisms which render them susceptible to the toxic effects of benzene. These tests can now be done quite inexpensively and can be done using saliva rather than blood.

Working with fuels or solvents is a dangerous occupation. Most workers will not be affected, but the unlucky workers who are affected may pay for their misfortune with their lives.